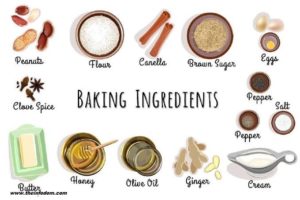 Basics of baking ingredients are very important to know the baker because in baking we should use every ingredient by purpose. Baking is both a science and an art. This article explains the science behind this. In every recipe for baking, every ingredient has a purpose. In a cake, for example, the flour gives the structure, the eggs add to the ingredients, the baking powder and the baking soda make it rise, the fats such as butter and oil make it less chewable and the sugar sweetens it and keeps it moist.

The world’s oldest oven was discovered in (Croatia) in 2014 dated back 6500 years ago. Enceinte Egyptians baked their bread using yeast they used to brew beer. Bread baking begins in Ancient Greece in around 600Bc leading to the invention of enclosed ovens. Baking flourished during the Roman Empire. Beginning around 300Bc, the pastry cook become an acceptation known as Pstillarium. Because of historical social and familial roles, baking has traditionally been performed at home by women for day-to-day meals and by men in bakeries and restaurants for local consumption. When production was industrialized, baking was automated by machines in large factories. The art of baking remains a fundamental skill and is important for nutrition, as baked goods, especially bread, are a common and important food, both from an economic and cultural point of view. A person who prepares baked goods as a profession is called

Flour provides the structure of baked goods. Wheat flour contains proteins that interact with each other when mixed water, forming gluten.

It is the elastic gluten framework that stretches to contain and expand the leaving gases during rising. The protein content of flour affects the strength of the dough. The different wheat types contain different amounts of gluten forming the protein.

In yeast bread strong gluten from work is desirable, but in cakes, cookies and quick bread high protein flour make a tough product.

Bread flour is hard flour with about 12% of protein, bread flour is used for great raised bread because the dough produces has more gluten then dough made with other types of flour. Sufficient gluten produces a light loaf with good volume. Slices hold together rather than crumble. 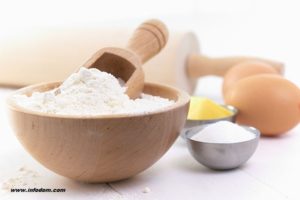 Cake flour is soft that has 7.5% protein The lower gluten have a tend caves, the product to have a tender. The more crumbly texture that is desirable in cakes.

Whole wheat flour may be substituted for part of the white flour in yeast and quick bread, but the finished product will reduce whole wheat or contain the nutrients germ and bran as well as the endosperm of the wheat kernel.

Cornmeal coarsely ground dried corn. Corn flour is made more finely ground corn. Both cornmeal and flour contain 7.8% protein on a dry basis neither cornmeal or corn flour will produce gluten. A graining texture in cornbreads/meal can be avoided by mixing the cornmeal with the liquid of the recipe, baring to the boil and cooling before mixing with other ingredients.

Rice flour has about 6.5-7% protein and does not form gluten, for example, who did not tolerate gluten, rice flour is an acceptable substitute for wheat, barley rye or oat flour. In baked products, 7/8 cup of non-wax nice flour is usually used in place of 1cup of all-purpose or wheat flour.

Yeast belongs to the fungus family it is formenents carbohydrates (sugar) to produce carbonate oxide gas and alcohol, which rises and east products giving it volume and texture, these by-products of yeast also contribute to the color and aroma of bread and other lasted product.

Eggs are another basic ingredient in any product, they provide structure raising flavor and moisture, the also tenderize cakes and add color nutria valued.

This is not used alone as a raising agent but sometimes used with bicarbonate of soda in recipes to replace baking powder.

This is the sugar mostly used commonly in cake making but especial Wished sponge cakes, creamed mixture and meringues. The small regular grains ensure that it blends smoothy in mixing to give an even texture.

This has a coarser texture than caster sugar and is best used for rubbed in cake and cookies mixture or in the melting method. If used in the cream mixture it will give a slight grittiness and speckled appearances to the cake and cookies. Neither would the cake have such a good volume.

This is used as a sweetener in some recipes. It is condensed milk from which half the water content has been removed and in which sugar has been added (it makes wonderful toffee and fudge)

The different types and their uses are desirable as you required.

Milk chocolate has the addition of full cream milk as well as sugar to the cocoa butter and its sweetener the flavor is therefore lost in baking. it is good for decoration and always popular with children. further, Milk chocolate is also available as chips.

Unsweetened pure or cooking chocolate is often used by professionals in baking. it is available from cake shops. Many of these are also milk order suppliers and is sold in blocks from a chocolate chip.